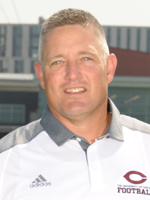 Chris Wilkerson begins his sixth year as Head Football Coach at the University of Chicago in 2018, and his 24th year overall as a collegiate football coach.

In 2017, UChicago's defense stood out in its first season in the Midwest Conference. The Maroons finished the regular season ranked third in NCAA Division III in turnovers gained with 31 (14 interceptions, 17 fumble recoveries). They were 19th in blocked kicks and 26th in total defense (282.1 YPG). Additionally, running back Chandler Carroll set new school records for career touchdowns (46), career rushing touchdowns (37), career points (276), career rushing attempts (859) and touchdowns in a season (18).

The 2016 Maroon offense produced the most prolific season in school history, breaking 10 team records and 11 individual records (career, season and game). The passing attack was ranked No. 4 in NCAA Division III with 381.0 yards per game, while also coming in No. 18 in total offense (485.6 YPG). Individually, quarterback Burke Moser finished second in the nation in both passing yards (3,766) and completions per game (31.7). Running back Chandler Carroll was 11th in all-purpose yards (174.2 YPG).

At the conclusion of the 2015 season, Wilkerson owned the best three-year record in the modern era at 20-9. His 2015 squad got off to a 4-0 start for the third-straight season. The hot start allowed the team to earn its first-ever national ranking in the modern era at No. 24 in the D3football.com poll (Oct. 4).

Statistically, the Maroons did not allow any punts or kicks to be blocked, while also ranking 8th in the NCAA Division III in turnovers lost and 18th in fewest penalty yards. Running back Chandler Carroll became the sixth Maroon to exceed 1,000 rushing yards and also broke the school record for rushing yards in a game with 311 versus Centre College. Quarterback Burke Moser set school records for season completion percentage (.584) and completions in a game (41) while tying for first in season touchdown passes (21). Cornerback Vincent Beltrano concluded his career as UChicago's all-time leader in interceptions (15), passes defended (40) and punt return yards (528).

Dartmouth's special teams and running backs excelled in recent years under Wilkerson's tutelage. The team was ranked in the top 10 nationally in a number of categories, including punt return average, blocked kicks, individual rushing average and fewest fumbles lost. His stand-out players featured a pair of All-Americans – Dartmouth's all-time leading rusher Nick Schweiger and punt returner Shawn Abuhoff. As the defensive coordinator from 2005-08, Wilkerson's highlights included a pass defense that ranked 14th in the country in his debut season.

Prior to his time at Dartmouth, Wilkerson coached the defense and special teams at San Jose State University from 2002-04. In 2003, he was a nominee for the Broyles Award, given annually to the nation's top assistant coach.

Wilkerson began his coaching career at his alma mater Eastern Illinois University, serving from 1995-2001. He led the special teams unit all seven years and also had stints as defensive coordinator, linebackers coach and defensive line coach. The Panthers reached the NCAA Division I-AA playoffs four times and won a pair of conference championships during his tenure. Wilkerson's defenses and special teams were regularly ranked in the national top 20 in numerous categories.

Wilkerson earned his bachelor's degree in physical education from Eastern Illinois University in 1995. Chris and his wife, Sharna, have three children – Isabella, Peyton and Charlotte. 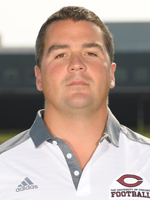 John Pont began his first season as the Offensive Coordinator and Quarterbacks Coach on the Maroon football staff in 2017.

He comes to the Hyde Park campus from fellow University Athletic Association (UAA) school Case Western Reserve University. While at Case Western Reserve, Pont was the Receivers Coach in 2015 and added the title of Offensive Passing Game Coordinator in 2016. The Spartans averaged 240 passing yards per game in 2016, with wide receiver Brendan Lynch posting the second-most receiving yards in school history (1,049). As an offense, Case Western Reserve scored 39.2 points per game – the 26th-highest mark in NCAA Division III. Quarterback Rob Cuda was picked as the UAA Offensive Player of the Year.

Pont earned a bachelor's degree from Miami (Ohio) in physical education and went on to receive his master's degree in sport administration from Florida State. His grandfather, John Pont, was named National Coach of the Year in 1967 after leading Indiana University to their lone Rose Bowl bid. 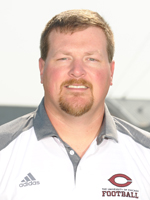 Luke Cutkomp begins his fourth season with the Maroons football staff in 2017. His coaching duties include Defensive Coordinator and Linebackers Coach.

In 2015, senior cornerback Vincent Beltrano was named a First Team All-American while setting new school records with 15 interceptions and 40 passes defended. He was also a CoSIDA First Team Academic All-American.

Cutkomp previously spent nine years at Aurora University, serving as defensive coordinator, defensive line coach and special teams coordinator in his tenure. He was a finalist for the Muscle Milk/Footballscoop.com Division III Coordinator of the Year in his first season as defensive coordinator in 2008. The Spartans ranked first in Division III in takeaways, interceptions and turnover margin, third in total defense and fourth in rush defense and opponent first downs allowed.

Under his direction as coordinator, Aurora's defense totaled 28 All-Conference selections, eight all-region players, four All-Americans and one NACC Defensive Player of the Year.

Cutkomp played tight end for Wartburg and graduated with a bachelor's degree in elementary education in 2003. He later received his master's degree in education from Carroll (Wis.) in 2007. 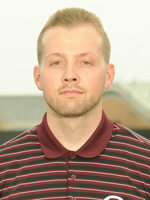 Davidson arrived in Hyde Park after spending the 2017 season at Defiance College. He was the Defensive Coordinator, Defensive Backs Coach and Academic Coordinator for the Yellow Jackets. Additionally, he coordinated the punt return and PAT/field goal block units.

The 2017 Defiance defense led the Heartland Collegiate Athletic Conference (HCAC) in pass defense, total turnovers and interceptions. The Yellow Jackets tied for second in all of NCAA Division III in total turnovers, while ranking eighth in both interceptions and fumble recoveries. Six members of the defense were picked to the All-HCAC teams.

Prior to his time at Defiance, Davidson spent two years as a graduate assistant at Minot State University, where he coached defensive backs and linebackers. He received his master’s degree in management.

As a collegiate student-athlete, Davidson played defensive back at Idaho State University. He graduated with bachelor’s degrees in finance and Spanish. Davidson was also invited to rookie minicamp with the Seattle Seahawks after the 2014 NFL draft. 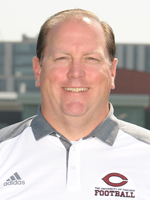 John Lizak starts his eighth season as offensive line coach at the University of Chicago in 2017.

During his tenure with the Maroons, Lizak has produced 10 All-UAA players on the offensive line. Those players have totaled nine First Team All-UAA selections, including John Tabash three times.

The 2016 Maroon offense produced the most prolific season in school history, breaking 10 team records and 11 individual records (career, season and game). The offensive line blocked for quarterback Burke Moser, who finished second in the nation in both passing yards (3,766) and completions per game (31.7).  Running back Chandler Carroll ran for more than 1,000 yards for the second-straight year (1,077).

In 2015, UChicago's offensive line helped pave the way for the school's first 1,000-yard rusher in 19 years. Running back Chandler Carroll put up the sixth-highest season total in school history (1,060 yards) and also broke the single-game rushing mark with 305 yards.

Lizak's offensive lines have also helped quarterbacks Burke Moser and Marshall Oium set a combined 15 school records. Lizak was also part of the 2010 and 2014 UAA Coaching Staff of the Year when the Maroons won a pair of UAA Championships.

Lizak graduated from North Central College in 1995 with a degree in finance and earned All-CCIW honors as an offensive lineman in 1994. He is also the older brother of former UChicago defensive lineman Ed Lizak. 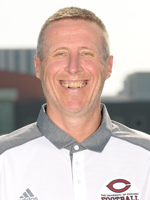 John Kropke enters his sixth season with the Maroons in 2017.

Kropke played his college ball at Illinois State University where he earned a degree in political science and was an AP All-American Honorable Mention recipient in 1987. He spent nine seasons in the Canadian Football League as a defensive lineman and coached most recently for the Hamilton Tiger Cats in the CFL.